Use R & Tidyverse to develop a churn management strategy

Customer churn is a major problem for most companies. Losing customers requires gaining new customers to replace them. This could be around 10X more expensive than retaining existing customers, depending on the domain.

A customer is considered churn when he/she stops using your company’s product or service. This is easy to define for a contractual setting, as a customer is considered as churn when fails to renew the contract. But in a non-contractual setting, there aren’t clear rules for defining churn. In most of these cases, business users with extended domain knowledge work together with data scientists/data analysts to define what is considered to be churn in the specific problem. For example, in a retail organization, the team could define that a customer is a churn when he fails to purchase anything in the last 4 months.

Our case study is a bank that wants to develop a churn model to predict the probability of a customer to churn. The banking sector has become one of the main industries in developed countries. The technical progress and the increasing number of banks raised the level of competition. Banks are working hard to survive in this competitive market depending on multiple strategies.

Three main strategies have been proposed to generate more revenues:

In our case, we focus on the last strategy i.e. increase the retention period of customers. The original dataset is public and can be found at kaggle

We use the read_csv() function (from readr library) to read the csv file in R.

Use glimpse() function to inspect the dataset.

One of the most common problems in any data analysis is to discover & handle missing data.

There aren’t any missing values.

Check the levels of categorical/text variables

Now we want to check the levels of all categorical variables.

It looks that all character variables, are categorical variables with a few levels (2-3).

Now we want to check the distribution of categorical variables concerning churn. 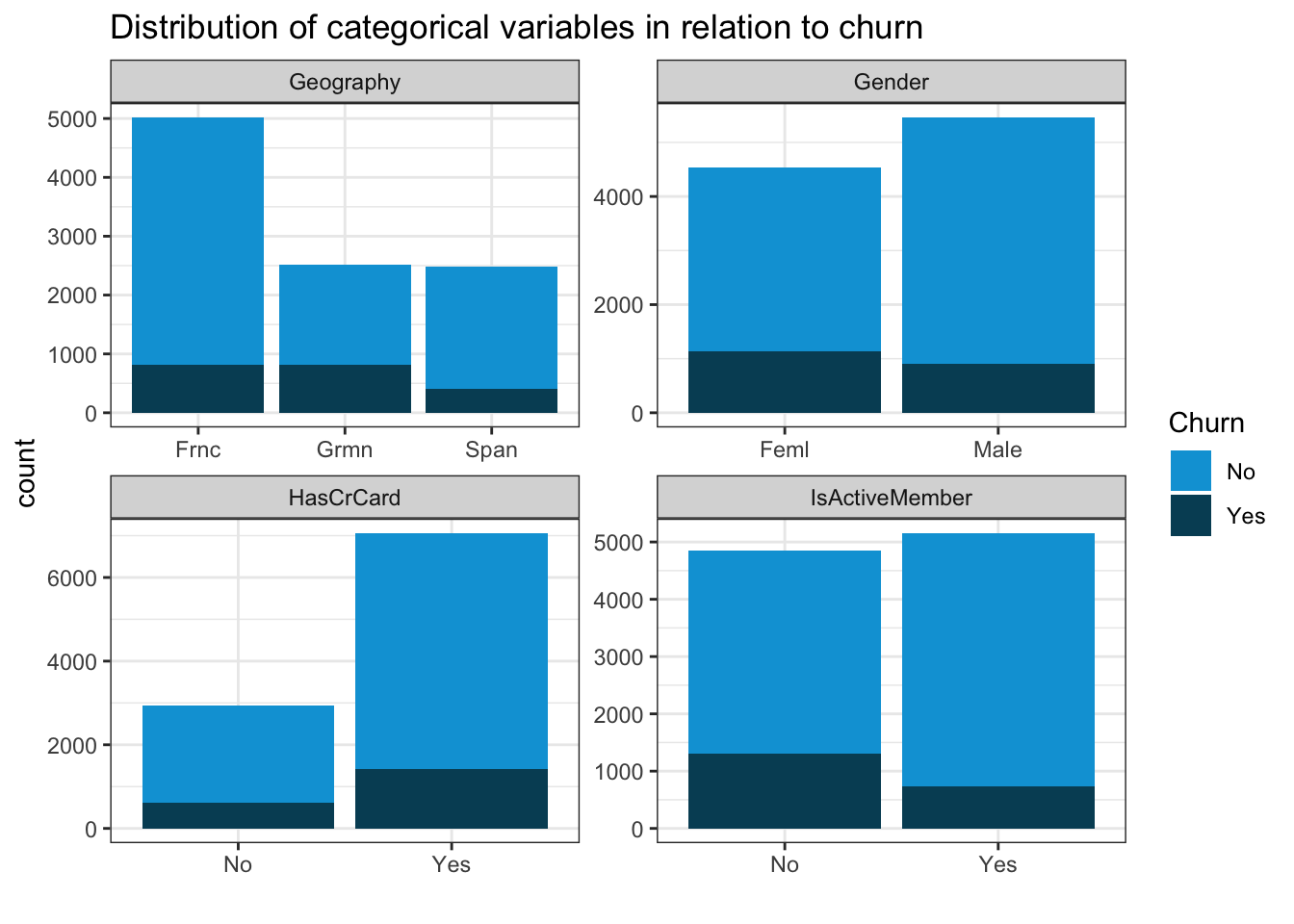 The main findings are:

Check the distribution of the numerical variables concerning churn. 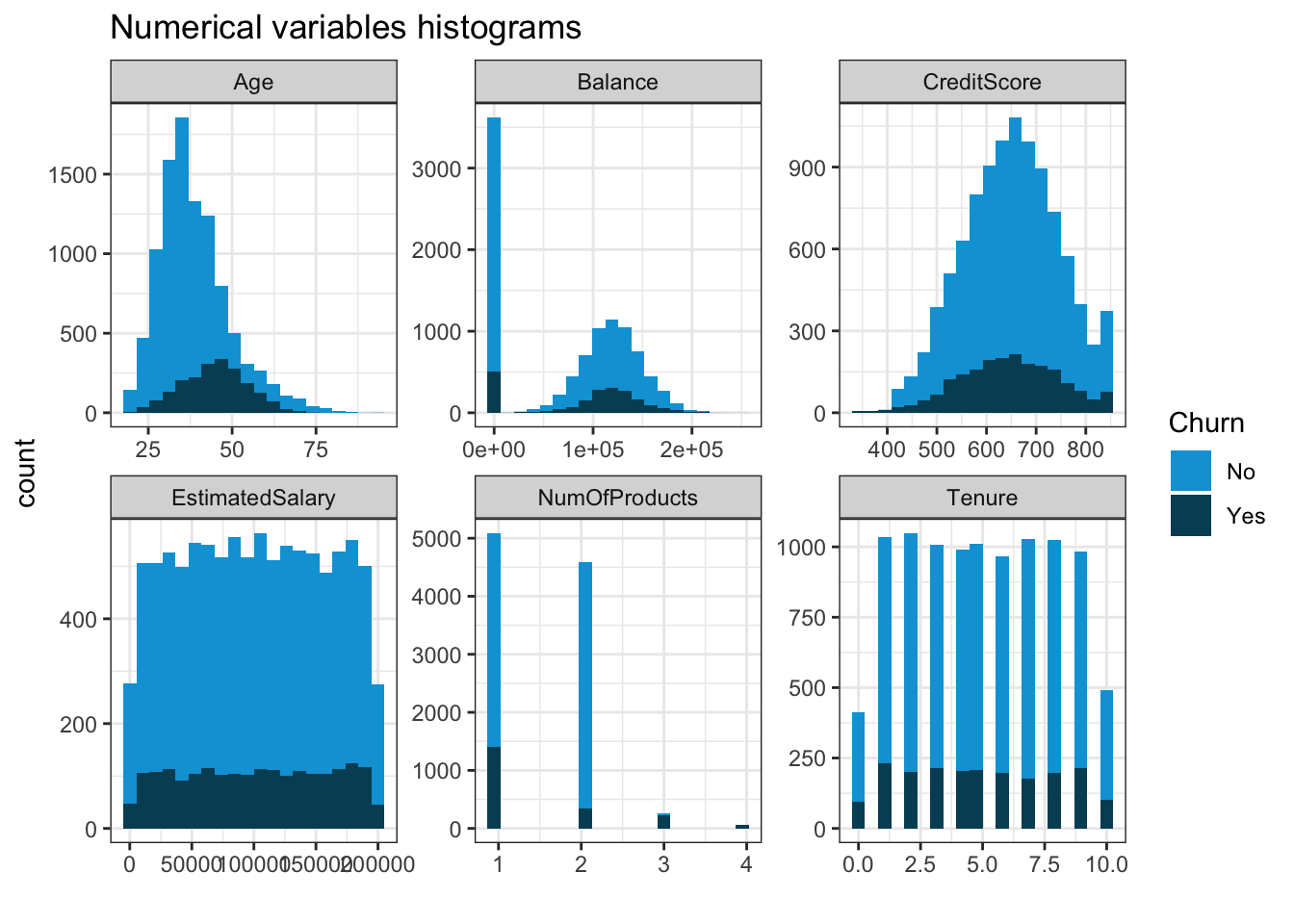 It seems that higher age means higher probability of churn 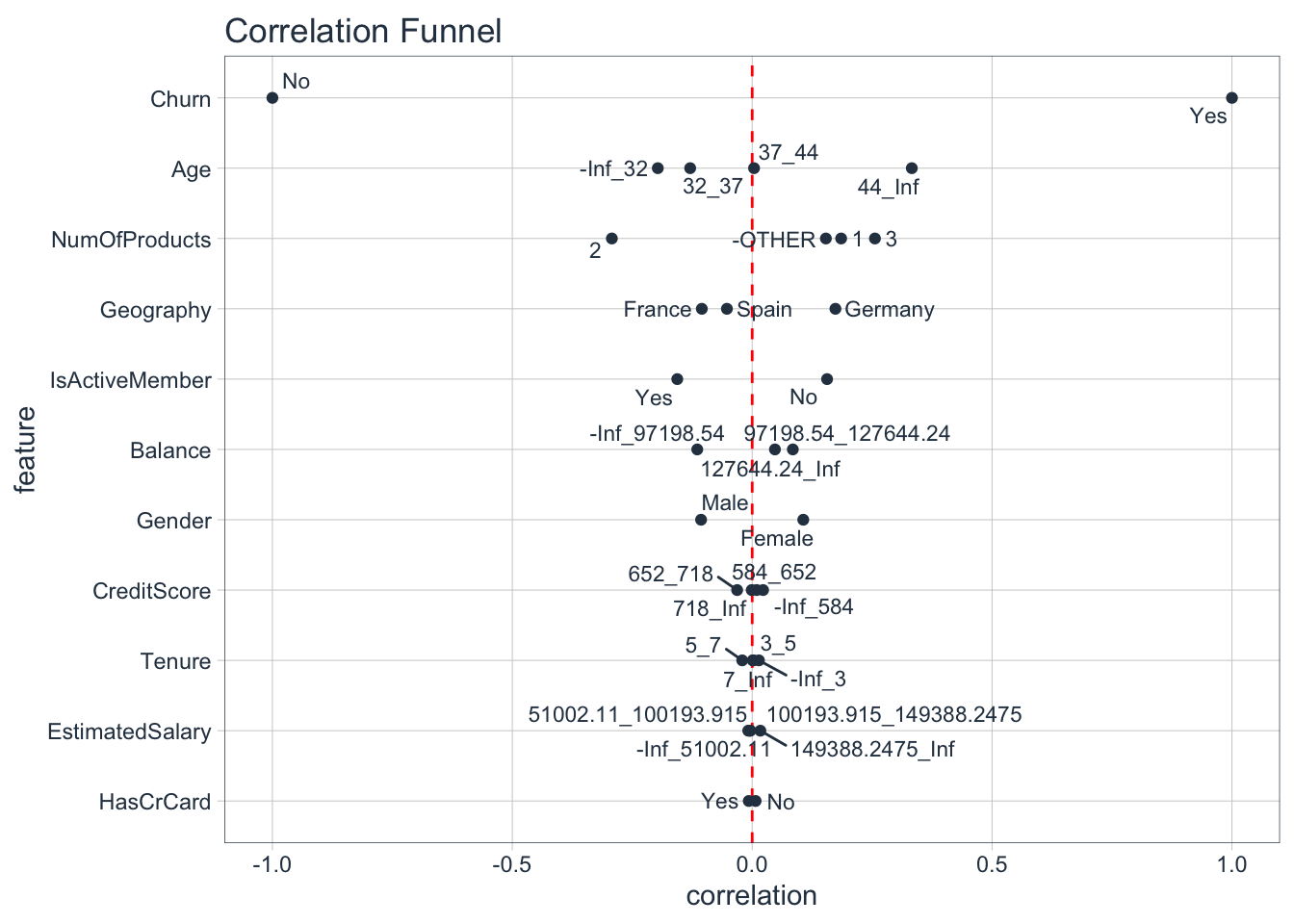 It looks like Age, Number of products, Geography & Member activity seem quite important. Balance & gender are less important. Credit score, tenure, estimated salary & credit card seem to be unimportant for churn, as almost all classes have near zero correlation.

Now we can go ahead and develop a machine learning model that will predict the churn probability for all customers.

Prepare the recipe of data for modelling

Processing data according the recipe

Setting the train controls for modelling

Now we can save all models in a single file

We can load all trained models

In this step, we’ll compare the models’ accuracy.

ROC curve or receiver operating characteristic curve is a plot that illustrates the diagnostic ability of a binary classifier system as its discrimination threshold is varied.

i.e. how well the model predicts at different thresholds 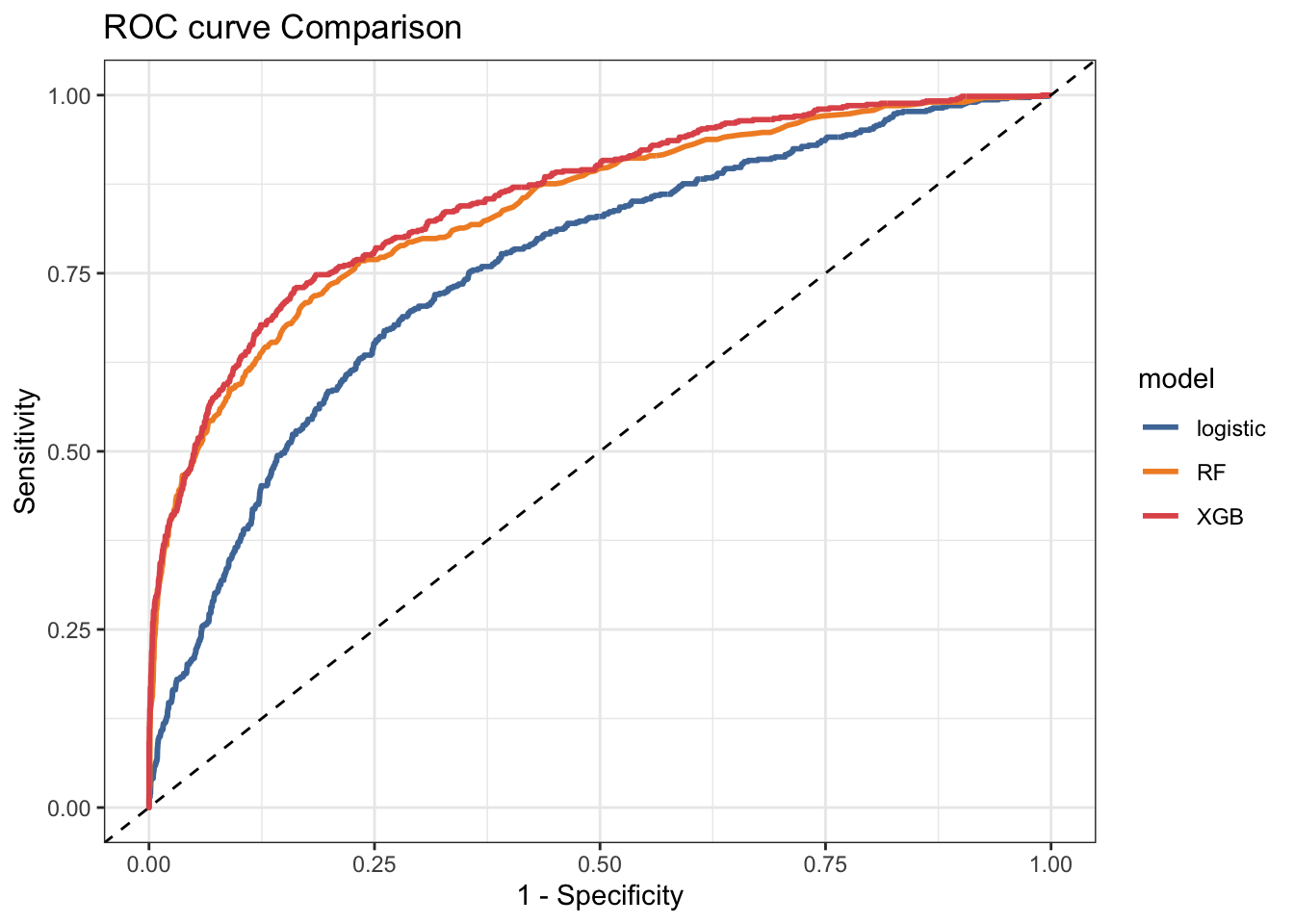 The largest the AUC value, the better is the model accuracy.

It is important to understand how a model works, especially in a case of a churn model. A common measure that is used is the global feature importance. It measures the contribution of each variable towards the churn prediction.

This importance is calculated explicitly for each attribute in the dataset, allowing attributes to be ranked and compared to each other. Importance is calculated for a single decision tree by the amount that each attribute split point improves the performance measure, weighted by the number of observations the node is responsible for. The feature importances are then averaged across all of the decision trees within the model. 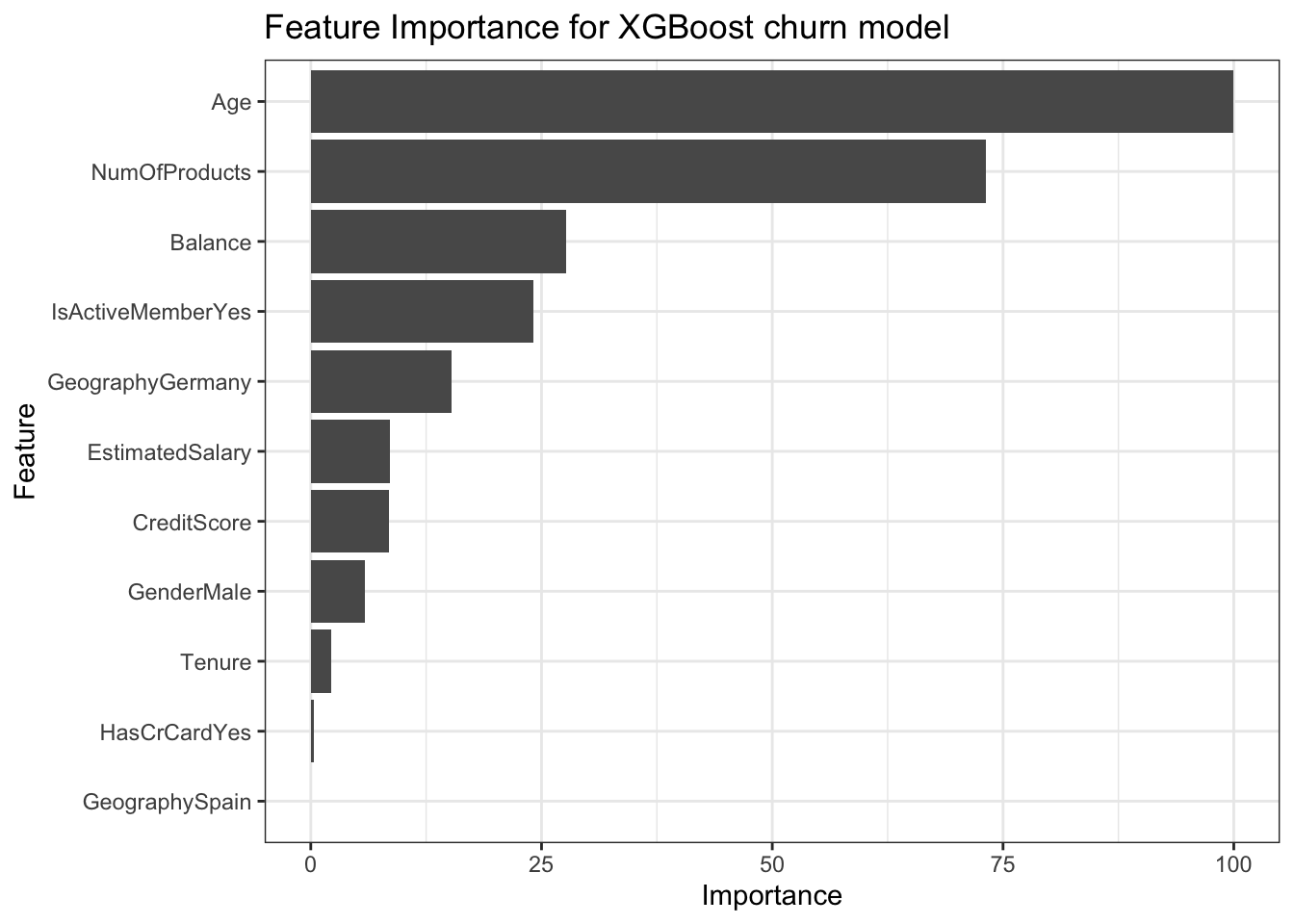 It seems that the top 2 most important feature are:
- Age
- Number of products

When we want to run predictions on customers we can follow the process below.

Although we developed a model that can predict pretty well if a customer will churn, the model output probabilities are not sufficient in the business context. We need some metric that will be understood & easily used by all stakeholders and remove the complexities of e.g. explaining a threshold to non-technical stakeholder.

An initial tactic is to develop different sales offers (or marketing campaigns) for the different churn risk groups.

For example, customers that belong in churn risk groups 10 & 9 have a significantly higher churn risk than for example 1 & 2. So it will be crucial to offer them something more to retain them.